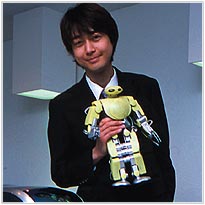 The goal of fuRo, Future Robotics Technology Center, in robot research and development is the integration of function and design. This is one of three mainstays that make up the conceptual underpinnings of fuRo. The near-futuristic design of fuRo facilities is a concrete expression of that notion.

The three mainstays are: First, conducting R&D on future robots; second, working closely in tandem, i.e. conducting joint research, with the private sector to build new industrial sectors in robotics; and third, exploring the role of product design in robotics. Our goals are to eliminate waste through the integration of function and design, and to improve robot performance through enhanced design. Both the morph3 robot and the fuRo facilities are themselves expressions of this concept.

I formerly served as the robot research team project leader in the Kitano Symbiotic Systems Project at the Japan Science and Technology Agency. We worked with over 20 companies to develop robot components. I sensed, however, that at a government-affiliated organization one could only go so far in combining academic and business efforts to create new industrial sectors in robotics. Seeing as the project was already winding up and the research team members heading off in all directions, I hit on the idea of transferring the research team intact to a new home.

Robotics research is a composite undertaking. A robot research team requires experts in electronics, mechanical engineering, artificial intelligence, programming, all sorts of fields. And since our goal was to build new industrial sectors in robotics, no single company would do as a destination. It was then that the Chiba Institute of Technology proposed to take in our entire research team as a research institute directly subordinate to the educational corporation in such a way that we would be tied in with all of its academic faculties and departments, and the establishment of fuRo was effected with astonishing speed.