CanguRo is a RidRoid, an intelligent robot that is transformable and ridable. It was planned and developed by Future Robotics Technology Center (fuRo) of Chiba Institute of Technology (led by Takayuki Furuta) and product designer Shunji Yamanaka.

What is CanguRo, a RidRoid?

In the past, the horse was a partner and a means of transportation. The fundamental concept of CanguRo is the mechanical horse – a future machine lifeform produced from the latest robotics and AI technologies fused by product design. As a partner robot, it never leaves the side of its master. When the master wants to go somewhere, it transforms itself into a vehicle. Through human-machine integration, CanguRo augments its master’s physical functions.

A hundred years have passed since the automobile was invented and the Ford Model T was put into mass production. It is time to build a totally new relationship between people and vehicles for the AI era.

In robot mode, CanguRo operates like a buddy droid in a movie. As a loyal partner, it follows its master in shopping malls, giving help at times. Sometimes it works as a communications terminal, letting its master chat with friends and family members. Even from some distance away, CanguRo comes to its master upon a call from a smartphone or tablet. The fully automatic operation is based on scanSLAM—fuRo’s proprietary SLAM technology. CanguRo is a partner robot that never leaves the side of its master.

CanguRo has a built-in body-sonic system. According to the travel speed, CanguRo generates pulses like heartbeats, transmitted via the saddle to let the rider recognize the current speed by haptics. The steering has a force feedback, which directly transmits the radius of the turn to the rider’s arms. All these sensory functions are implemented to produce a sense of human-machine integration.

CanguRo thus augments the motional and sensory functions of the human-being.

SLAM (Simultaneous Localization And Mapping): A core technology used in automatic navigation, with a role of eyes of human-beings. SLAM enables the robot to analyze the information from sensors such as lasers or cameras, simultaneously predicting its own position and drawing a map of the surroundings. 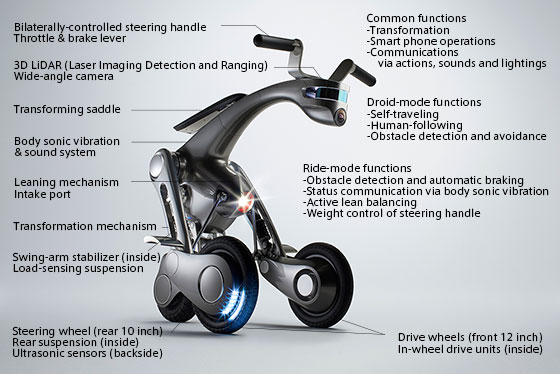 CanguRo was designed to be less than 600 mm wide, a size similar to the breadth of a man’s shoulders. CanguRo is thus small enough to look natural while moving beside its master, and large enough to let the rider feel the move as one in ride mode. The two legs have front drive wheels at their ends and consist only of a thin framework to blend with the rider’s legs. To make the wheels powerful, ultracompact, and thin, the drive unit is housed inside the wheels. With the brand-new in-wheel drive unit, CanguRo moves with the rider as one, accelerating and decelerating quickly and smoothly.

The operating environment of CanguRo is much more chaotic than that of a car, so the compact body has to contain a SLAM and navigation system that features higher performance than that for a large-sized automatic operation car. The proprietary SLAM technology of fuRo, scanSLAM, solves this difficult problem. The scanSLAM technology is among the top performers of the world. The scanSLAM technology enables real-time mapping and localization, providing all the fundamental information required for autonomous operation. The processing is constantly improved, updated, and optimized through real-world events like an autonomous robot competition (Tsukuba Challenge, for instance). In particular, scanSLAM has superiority over its competitors in terms of processing speed, being capable of effective mapping and localization in a pedestrian space that lacks the environmental rules seen on a roadway. Supported by the top-performance SLAM technology of the world, CanguRo boasts a navigation performance higher than that of a large-sized automatic operation vehicle while the PC housed in its small body is compact and slow.

CanguRo features a robot control operating system originally developed by fuRo. The system allows effective management of software functions where there are many different robot hardware resources and software modules.

In ride mode, CanguRo detects the movement of the rider’s trunk with the force sensor built in its suspension system. It takes an appropriate posture by leaning and transforming its body using a ZMP-based method (an application of biped walking control). This function enables the rider to initiate quick turns at an ultrahigh speed by body movement, just like in skiing and skating. The rider would take CanguRo as a body augmenter rather than as a mere vehicle.

In ride mode, the rider is notified of the machine status by haptics: the turning radius is indicated by the force feedback on the handle bars, and the vehicle speed is indicated by the heartbeat-like pulses from the body-sonic system installed under the saddle.