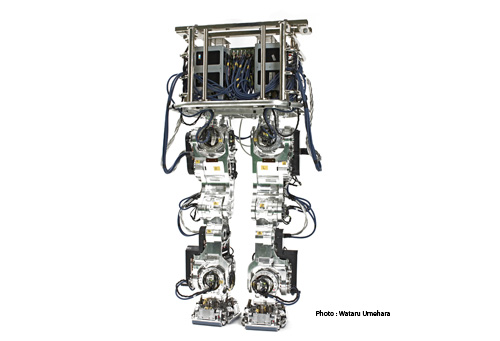 The primary objective in this project is the realization of a versatile two-leg robotic vehicle available for anyone including handicapped, elderly, or lively person. The first prototype, core, is a carrier-type biped locomotion robot of 1915 mm height and 230 kg weight (approx.), consisting mainly of two legs (six joints each) and payload racks. Developed as a research platform in our series of robotic vehicle projects, core is capable of human-like walking with additional on-body payloads up to 100 kg (corresponding to a human).

Mobility is a fundamental factor to the human life. As regularly seen in the civilized society, wheeled transfer, such as automobile or bicycle, is the most popular way, enabling fast arrival and enlarging our activity area. More flexible and versatile way is however achieved by a means of legged locomotion. Because each and every building structure in our society is designed and built suitably for two-legged beings, two-leg locomotive vehicle could be more adequate especially for the purpose of transferring in the human life environment.

In order to allow heavy loading works, a huge-power brushless motor, specially developed for this prototype, is applied for each leg-joint drive, while an impulsive force absorbing system, also developed for this prototype, is effectively installed at each foot. A number of sensors are distributed on the body to measure and manage the dynamical state of the walking motion and the electrical state of the power units for stable and safe walking transfer.

Although 100-kg weight as an alternative to a human is currently used in the first prototype for the experiment purpose, various fields of technological investigations, besides bipedal transfer theory and system control theory, have being addressed on this research platform, including reliability studies on sensor networks and power systems. In addition, research issues related to autonomous transfers such as simultaneous localization/mapping and autonomous navigation are vigorously investigated in other research projects on-going in our robot center. Integrating these research achievements, a versatile and intelligent two-leg robotic mobility providing a real ride will be realized in the near future.