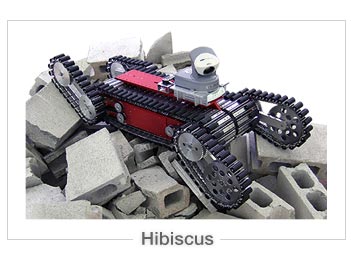 fuRo is working on development of a human interface realizing semi-autonomous travel control permitting manipulation by means of a single joystick of desired direction and speed over complex terrain and varied disaster sites, including across rubble, where conventional robots experience difficulty traveling. The robot is equipped with six crawlers (two each front, center and rear) bilaterally independent in their control, of which the left and right crawlers at front and rear also function as arms. The greater diameter of the forward extremity allows travel with a stable attitude and without the arms penetrating gaps in rubble. The goal is for Hibiscus to be field-capable during 2007 and then to enter service with fire stations and rescue units throughout Japan.